Gualtieri, of medieval origins, has undergone several devastating floods over the centuries, even though it managed to preserve architectural beauties of considerable value.

Among these the beautiful Piazza Bentivoglio characterised by a perfect square of 100 meters side, with a portico on three sides. Heart of the city, the square was built by the Ferrarese architect Giovan Battista Aleotti known as l'Argenta between 1580 and 1610. The project of Palazzo Bentivoglio, residence of the Marquis of Gualtieri, which overlooks the in front of the Clock Tower also was made by l’Argenta.

Inside the only wing of the Palazzo that has survived to the present day, it is possible to admire the seventeenth-century frescoes by Badalocchio (particularly in the Sala dei Giganti), the rich decorations, also of the seventeenth century, of the Bentivoglio Chapel; the eighteenth-century Theater built by Fattori has recently been re-opened and during the summer season to host a program of theatrical and musical performances.

Inside the Palazzo Bentivoglio, in the room of Icaro, it is possible to visit the collection of paintings belonging to the theatrical tailor Umberto Tirelli, a native of Gualtieri, donated to the Municipality of Gualtieri in 1992. The collection consists of about fifty works by artists friends of the tailor, who died in 1990. The famous names include Balthus, Cagli, Casorati, Clerici, De Chirico, Guttuso, Maccari and Manzù. In the same room it is possible to admire the costumes of Pier Luigi Pizzi for Enrico IV of Pirandello, worn by the actor Romolo Valli and that of P. Tosi for Ludwig by Visconti worn by the actress Romy Schneider, both coming from the Tirelli donation located in Palazzo Pitti in Florence. The Palace houses also the Documentary Museum and the Antonio Ligabue Study Center, dedicated to the works of the famous twentieth century painter who was born in Zurich and lived in Gualtieri. Also, in Piazza Bentivoglio there is the collegiate church of Santa Maria della Neve, built on a design by Argenta but totally destroyed by a flood and rebuilt in the eighteenth century (inside a Crucifixion by Camillo Ricci). 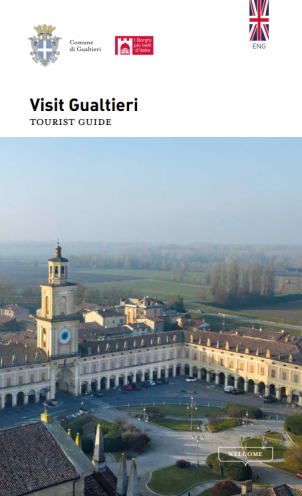